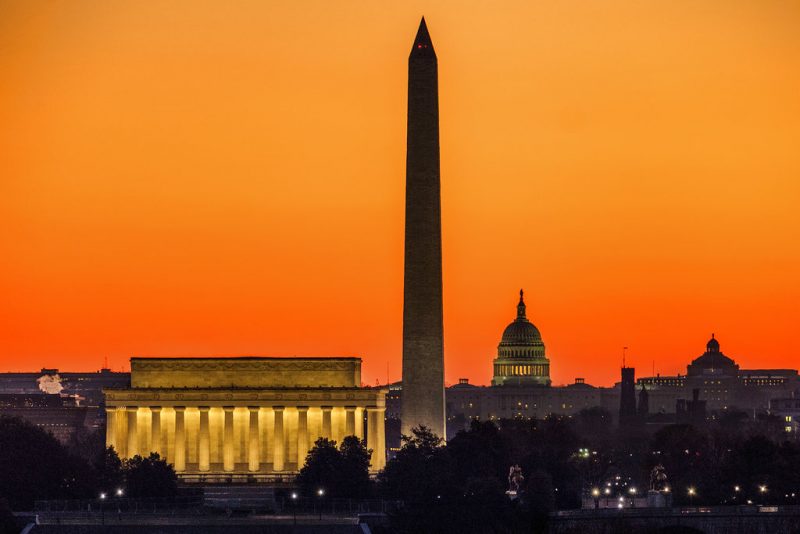 Daybreak casts a warm glow behind the Washington skyline on a clear day in the Nation’s Capital, Tuesday, Feb 27, 2018. (AP Photo/J. David Ake)

The Senate passed an omnibus spending bill late Thursday that included federal medical marijuana protections in place since 2014. But the fate of the $1.3 trillion spending bill remains up in the air Friday after President Donald Trump tweeted a veto threat.

Known as Rohrabacher-Blumenauer, the provision prohibits the Justice Department from using federal funds to prevent certain states “from implementing their own State laws that authorize the use, distribution, possession or cultivation of medical marijuana.”

After clearing the House Thursday morning, the Rohrabacher-Blumenauer amendment was included in the fiscal year 2018 omnibus funding legislation passed by the Senate, a spokesperson for Rep. Earl Blumenauer, D-Ore., confirmed to The Cannabist.

“While I’m glad that our medical marijuana protections are included, there is nothing to celebrate since Congress only maintained the status quo,” Blumenauer said in a statement. “These protections have been law since 2014. This matter should be settled once and for all. Poll after poll shows that the majority of Americans, across every party, strongly favor the right to use medical marijuana.”

Sen. Rand Paul, R-Ky, who vowed to read the entire document, tweeted the “good news for states[sic] rights” that the language was included on page 240 of the 2,232-page bill.

The provision has been targeted by Attorney General Jeff Sessions, who last May sent a letter to congressional leadership asking that Rohrabacher-Blumenauer not be included in the appropriations bill for Fiscal Year 2018.

“It would be unwise for Congress to restrict the discretion of the Department to fund particular prosecutions, particularly in the midst of an historic drug epidemic and potentially long-term uptick in violent crime,” Sessions wrote.

Some lawmakers have hoped to take existing medical marijuana protections a step further by extending a similarly worded provision to state-legal regulations for adult-use cannabis. However, a bid to protect state recreational marijuana regimes was snuffed by Congress late Wednesday.

U.S. Sens. Michael Bennet and Cory Gardner of Colorado were among 18 senators who wrote to the Senate Committee on Appropriations in February with the request that its members “respect states’ laws regarding the regulation of marijuana.”

The Denver Post reports the exclusion of recreational marijuana-focused protections Wednesday was a blow to Colorado legislators who sought more security for their state’s cannabis laws following U.S. Attorney General Jeff Sessions’ scrapping of Obama-era guidance instructing prosecutors to leave those be.

Congressional aides told The Post that a slate of other controversial issues fighting to get in the massive bill — new gun rules, border security and funding for a major transportation project in the New York City area — complicated Colorado lawmakers’ efforts.

Marijuana advocates don’t consider the exclusion to be a total loss.

Don Murphy, the director of federal policies at the Marijuana Policy Project, told The Denver Post that additional protections for recreational marijuana would have been a huge victory, given the current political environment.

“Maintaining the status quo in the Trump administration is a win,” Murphy told the Post, referencing the medical marijuana provisions.

Popular In the Community

Find A Store Near You

Med Only
15 Minute Guarantee!
If you wait 15 minutes or longer to see a budtender, you’ll…

Med Only
Edible Deals!
We have select 100 mg EDIBLES starting at only $15! Select brands and …

Med Only
Make It Your Own Mondays
Choose Any Daily Deal At Phoenix Location!

Med Only
CBD Tinctures 500-1000 mg!
THIS IS YOUR TINCTURE DESTINATION! Get 1000 mg cbd tinctures for only …
Get Exclusive Deals
in your Inbox!
SIGN UP NOW

Med Only
Weed Wednesday!
Every Wednesday, we have our Top-Shelf Flower on sale! Come purchase…

Med Only
Cartridge Special
Buy any 2 cartridges and get a Free Dopen Battery!

Med Only
Tax Free Tuesdays
Every Tuesday pay zero tax all day on all products!!!

Med Only
Ounce Special
$199 OZ of Flower Mix & Match from any Tier!
Get Exclusive Deals
in your Inbox!
SIGN UP NOW

Med Only
T-SHIRT SATURDAYS!
WEAR YOUR MINT SHIRT AND SPIN THE WHEEL of 420 Spend $100 and Get a…

Med Only
$6 Grams!
We have select strains of flower for only $6 every day of the week!

Get The Cannabist Newsletter